Todays a few words about importing and exporting certificate template data with Active Directory.
This data is stored within Configuration partition of Active Directory and therefore it is common for whole Active Directory Forest.
But there are also situation, when you would like to move them between forest, for example from pre-production environment to your production one.
It can be done on two different ways. First is obvious, but dirty, and sometime can lead to serious problems with moved Items.
But after Windows 2008 R2 was released, there was introduced new feature – Windows AD CS Web Enrollment Services.
It can be used for cross forest CA publication with only External Forest AD Trust enabled.
More details about those protocols can be found here.
On the mentioned site, there are two great scripts written in powershell, what would export and import Certificate Template data to and from xml files in MS-XCEP format.
However, Those scripts have two bugs and one issue within when running on Windows 2012:

Most important part of this command is -m switch, which will result in “forest free” ldf output.
For import you should use the similar command:

And this should work from the begining, starting from Windows 2000 Version.

Hello,
Today fast review of rules for querying for embedded object within another WMI object.
Basic WMI search query returns collection of System.Management.ManagementObjectCollection. This collection contains a set of System.Management.ManagementObject. Each of them has filled in only a subset of all possible properties. This are those, what are simple WMI data types (String, Int, Bool). When we want to retrieve complex Class based property, the embedded object is missing and the code returns NULL value.
To archieve filling in these object fields, there is class method called Get()
This method is described here. It can be used for quick retrieval of single object, but also it is used during handling any modification of object.
The side effect is filling in the whole object including any embedded structured complex types instances.
Following code ilustrates the case:

there is many questions on the web about remote invoking SCCM actions on the client via scripting.
Within official SCCM 2012 SDK, there is absolutelly nothing about such client actions. Within the 2007 version it is demonstrated, but with local script and invoking the CPAppletMgr in conjuction with UIResourceMgr COM object class. But configuration of DCOM for accepting remote request for this objects is at least tricky and useless because it is dummy to beleve this classes will not change in the future.
Most natural way for SCCM to do this is create apropriative WMI calls.
And here Microsoft makes new troubles for all of us, scripting guys – in new SCCM 2012 SDK is dry description of classes witin CCM namespace. But also absolutelly nothing as notes for using this.
Finally I have found brilliant tool: SMSCLICTR, what encapsulates all of settings within simple to use .NET assemblies. This can also be used within Powershell, but sometimes usage such external modules is prohibited.
So I have made own piece of code in Powershell for doing this manually.

Hello,
Today I had an issue with converting standard eagle scripts, which are distributed by Farnell (Element14) as description of their products. Because there is several version of conversion scripts for Eagle to create proper KiCad Library files, I had found the newest one from http://www.modulbot.com/download.html.
The only issue is that I have Eagle 6.3, what is now available for download as the standard one.
Resulting libraries have elements 32 times bigger than it should be.
I had new update of this scripts, and library components are now correctly scaled.
Because I didn’t found an ‘e’ version, I have named it this way.
The script is available here: eagle-lbr2kicad-0.9e.ulp

This scary post linked to this article.
I have read the original article, prepared by Bardou, Focardi, Kawamoto, Simionato, Steel and Tsay. This was interesting lecture, what describes several improvements to well known attack by D. Bleichenbacher. This attack allows to obtain sensitive material by serie of calls to standard PKCS#11 API function C_UnwrapKey.

First imporant thing to explain is term Sensitive material. This is information existing outside the token in encrypted form. Most often this are symmetric cryptographical keys (e.g. AES keys), which are used for fast enryption of big amount of data. It is done this way, because symetrical encryption is much faster then asymetrical). Of course, the sensitive material can be also data for direct RSA encryption.
API Calls used in referenced document are indented for managing symetrical keys, so the term Key is used instead Sensitive material. That is why it can be misunderstanded as RSA keys can be compromised. It doesn’t work this way!

The originally described method was slow enough to call it “milion messages attack”, and it was marginalized. New poposition of impovements is importand because it significantly decreases required amount of token calls in really tricky way. The final amout of calls is small enough to successful attack in few hours or often minutes.

END_OF_DOCUMENT_TOKEN_TO_BE_REPLACED

There are rare situations, when you have to reinstall the RMS Cluster node. Most common case causing such need is unsuccessfull provisioning process. It usual fails because of really obvious things, such as already binded SSL certificate to Web Site in IIS. After unsuccessfull provisioning task, you have to uninstall whole AD RMS role and after the server restart you can try again with installation. Unfortunatelly sometimes there are the errors during uninstall too. This hidden errors causes subsequent issues during next attempt.
The error cited in post title has several different potential resons and solutions. Most of them is improper registry settings, which stayed after previous install. One thing, what you have to always remember, is that you have to check twice need of every registry change. Inproper registry edition can causes whole server operating system damage.
Namely described error can be caused by one of the following reasons:

If your situation doesn’t follow any of described cases, please fell free to put me message in a comment. 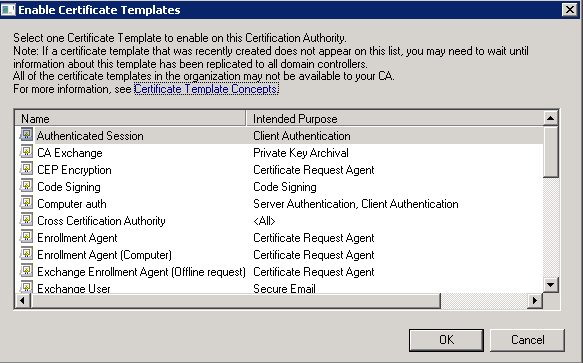 The solution for this problem is proper setup of bit flag in the CA configuration. It can be done with following command:

After registry update, there is necessity of restart CA service.
More over, there is possibility of manual edition of the templates list, which is used by CA for certificates enrollment. It is possible by edition of attribute

. These objects are available under following path

Today post is about why sometimes using manual can harm your things.
It is normal, that if you doesn’t know how invoke application in other way than simple double click on exe file, you call the command line
aplikacja.exe /? or aplikacja.exe /help
In the response we obtain in any form some information about command line switches handled by this program. Especially, we can obtain in this way information about advanced method of calling standalone windows operating system updates.
The Windows 2008 R2 Service Pack 1 installator responses with following:

For import process to Microsoft Deployment Toolkit, you have to unpack in any way the exe file to the Windows Standalone Update (msu or cab) files form. On the screen there is no such option.
But after several unsucessful tries I figured out that this command line:

fires up exactly this extraction process without any error message. First simptom of right execution was dialog window with directory tree for choosing proper location for extracted files. There is also the cab file, what is necessary for update usage with MDT 2010 U1.

I am only curious, why Microsoft doesn’t add it to the help screen.

Sorry, this entry is only available in Polish.

Today, the moment of glory comes. I am glad to tell you about my success. From now I am Microsoft Certificated Technical Specialist – Windows Vista.
The exam is not the hardest one, but i need to forewarn all who prepare for this not to take take Windows built-in applications and installation procedures topics lightly. These are the hardest parts imo.